There are dedicated regulations for weighing instruments and their calibration (EURAMET Calibration Guide, NIST Handbook 44, OIML); more on those later in the article.

In this article, the main focus is to look at the practical considerations and the different tests you should perform when calibrating your weighing instruments.

Let’s start by looking at some of the preparations you should make before the calibration and then look at the different tests you should be doing.

Before you can start the calibration of the weighing instrument, you should clarify a few things and get prepared.

You should find out the technical characteristics of the weighing instrument (max weight, d value), the accuracy requirement (max error allowed and uncertainty) and what to do if the calibration fails (adjustment).

Typically, the whole measurement range is calibrated and the calibration is performed in the location where the instrument is being used. Make sure you have enough weights for the calibration procedure available.

Next, let’s take a look at the different tests that should be done during the calibration.

The above picture is for rectangular and round load receptors, but naturally in practice there are many different shapes of load receptors and the location of the load will vary. Standards OIML R76 and EN 45501 will give guidance for different load receptor shapes.

The calibration procedure should specify where to place the load during the test and calibration results (in certificate format) should also document the locations.

As the aim of the eccentricity test is to find out the difference caused by the location of the load, it is not necessary to have an accurate calibrated load. It is naturally important to use the same load through the test.

If the eccentricity test is used also to determine the errors of the indication, then a calibrated load should be used.

Procedure for the eccentricity test

The zero may be checked between each location to see that it has not changed. If necessary, the instrument can be zeroed in between each test.

Alternatively, you may also tare the instrument when the load is in location number 1, as this makes it easier to see any difference between locations.

The repeatability test is performed by replacing the same load on the same place on load receptor (to avoid any eccentricity error) multiple times. Test should be done in identical and constant conditions and with identical handling.

The load used should be close to the maximum load of the instrument. Often a repeatability test is done with one load only, but it can be done also with several different load values separately.

The load does not necessarily need to be a calibrated load, as the aim is to find out the repeatability. If possible, the load used should be a single load (not several small loads).

A repeatability test is normally done by repeating the measurement at least 5 times in row. For instruments with a high range (over 100 kg / 220 lbs), it should be done at least 3 times.

For a multi-range instrument, a load close but below the first range max is often sufficient.

The purpose of the weighing test is to test the accuracy (calibrate) of the weighing instrument throughout its whole range in several steps, with increasing and decreasing weight.

Generally, the test points are selected so that they are equally distributed throughout the range. More test points can be used for the typical range of usage of the instrument.

With multi-range instruments, each range is to be calibrated separately.

In a weighing test, using multiple points through the measurement range of the instrument helps to reveal any issues with linearity. Linearity issues means that the instrument does not measure equally accurate throughout the range. Even the zero and full span are correct, there may be errors in the middle of the range, which is referred as linearity errors, or unlinearity (or nonlinearity).

Below picture is a general illustration of unlinearity. Even instrument’s zero and full range are adjusted correctly, there is error in the midrange due to unlinearity of the instrument: 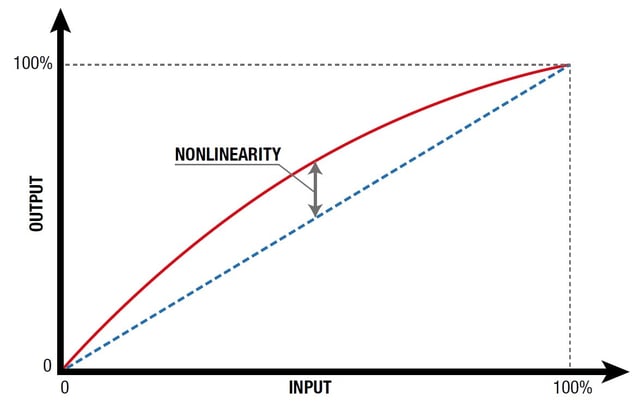 In a weighing test, when increasing or decreasing the load, it is important not to overshoot or undershoot. This means that when you increase the load, you must approach each test point with increasing weight. You should not add too much weight and then remove it, because then you lose the hysteresis information.

Likewise, with decreasing points, make sure that you approach each point with decreasing weight. Obviously, in order to be able do this, the usage of the test loads should be well planned in advance.

Picture below is a general illustration of hysteresis. When instrument is calibrated, the results are different with increasing and decreasing calibration points:

Minimum weight test is a test that is not always required to be done. This test is anyhow required within some industries, like the pharmaceutical industry.

The purpose of the minimum weight test is to find the smallest load that can be measured while still achieving reliable measurement results and fulfilling the accuracy requirements. When the measured value gets smaller, typically the relative error of the reading becomes higher. The weighing instrument should not be used to measure any loads smaller than the minimum load.

For the minimum weight test, the two main standards have different approach. Let’s take a quick look of those:

The US Pharmacopeia (Chapter 41)

In addition to the above standard requirements, the requirements in the pharmaceutical industry requires a separate minimum weighing test, where a small test load is measured multiple times to find out the accuracy of the instrument with a small load.

There are also some other tests specified in the standards, although these are typically not done during a normal calibration, but can be done as a type of approval test or in the initial verification.

Example of these tests are:

To avoid this blog post to come way too long, please download the related white paper to read more on this subject. The white paper discusses following additional subjects:

Heikki Laurila is Product Marketing Manager at Beamex Oy Ab. He started working for Beamex in 1988 and has, during his years at Beamex, worked in production, the service department, the calibration laboratory, as quality manager and as product manager. Heikki has a Bachelor’s degree in Science. Heikki’s family consists of himself, his wife and their four children. In his spare time he enjoys playing the guitar.

This site uses Akismet to reduce spam. Learn how your comment data is processed.