Procedures to keep or improve the quality of chemicals

Part 1 of this paper showed that a packed chemical has sufficient time to reach thermodynamic equilibrium with the inner atmosphere, which necessarily includes the vapor pressure of the substance or its decomposition products and generally atmospheric gases. During the service time, it is critical to obtain and keep the atmosphere internal to the container as uninfluential as possible. Laboratory air at room temperature and pressure contains the very active compounds O2 (≈150 Torr, 240 mg per liter), H2O (10‒20 Torr, 10‒20 mg per liter) and CO2 (≈0.3 Torr, 0.7 mg per liter) so that it is unsuitable for preserving the quality of chemicals. Thus its presence and ingress into the container needs to be avoided as much as possible. This can be achieved by a suitable choice of container (inclusive of its multiusable closure) and its internal atmosphere.

The container should be sufficiently small (suitable for 10‒20 withdrawals) to allow easy flushing with inert gas, as detailed below. As a rule, for liquids, we use 25- or 50-mL borosilicate glass bottles for reagents and solvents, and 5-mL containers for spectroscopic solvents, all with a screw cap. For solids, commercial wide-mouth containers of 50 mL or less are used. The cap is the most problematic component because, besides possessing long-term stability to the contents, it should be as gas tight as possible to avoid exchange of the internal atmosphere with the laboratory atmosphere. It should also be as small as possible and checked periodically for gas-tightness. 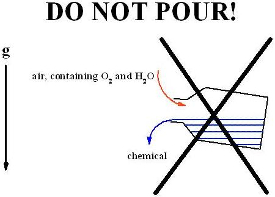 For reactive substances we use a solid “inverted hat” of polytetrafluoroethylene compressing an O-ring (in crush seal mode) of material suitable for the particular contents (i.e., Buna-N, viton, neoprene, ethylene propylene) on the rim of the glass neck by means of a screw cap. If the chemical was synthesized in the laboratory, rather than purchased, find which materials are suitable for its container and relative cap. For air-sensitive, even pyrophoric, chemicals, special bottles4 (see Figure 1) can avoid the use of a glove box or glove bag.

There are two kinds of suitable atmospheres internal to the container, henceforth designated as “inert” and “equilibrium” atmospheres.

Inert atmospheres consist of a gas of very low reactivity (inert gas) such as Ar or N2 plus the vapors of the sample at their equilibrium partial pressure, and are suitable for most stable chemicals.

Liquids should be removed from the bottle while standing vertically by means of a syringe connected to an extraclean pipet or needle (Figure 2). Solids should be removed with a 90° curved spatula or spoon while keeping the container vertical. When finished, fill the container with the inert gas (Figure 3), keeping the cap positioned to allow rapid closure of the container when enough inert gas has been introduced. Argon is generally the most convenient gas (Figure 4) because it is unreactive even in the few cases in which nitrogen can react, and is heavier than air so that it accumulates from the bottom of the container, displacing other gases. Nitrogen is less expensive and becomes necessary if the container will be immersed in liquid nitrogen (LN2), where argon condenses to a liquid that gives over 800 times its volume as a gas at room temperature and pressure. 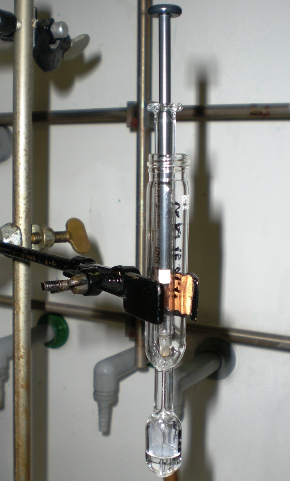 Figure 2 ‒ Storing or taking out a precise quantity of a pyrophoric liquid (Al(Et)3 25% in toluene) from the special container considered in Ref. 18 in Part 1. 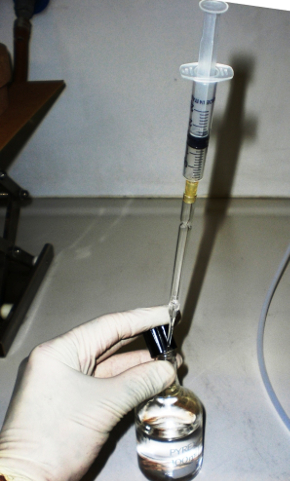 Figure 3 ‒ Removing a measured volume of a solvent. 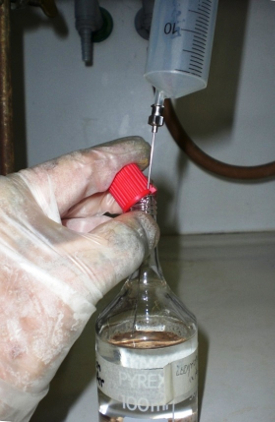 Since adsorption and absorption are invertible or reversing processes, repeated fillings of inert gas progressively displace dissolved or adsorbed oxygen, carbon dioxide and water, improving the quality of the compound or sample if it was previously stored under a lab atmosphere. If the substance has non-negligible vapor pressure, within a few minutes from closure of the cap its partial pressure reaches its equilibrium value, which adds to that of the injected inert gas at atmospheric pressure. Thus, in the container the equilibrium internal pressure will be higher than that of the external atmosphere, hindering leaks from there.

A plastic syringe of suitable volume and needle length (plugged when not in use) is a very convenient method of storage and source of the quantities of inert gas required to fill or flush the containers after partial removal of the contents. This simple procedure substantially increases, sometimes indefinitely (i.e., no reactant, no reaction) the service life of many chemicals and deters the degradation of samples.

The partial withdrawal of the chemical is completed by marking on the label the date and identity of the gas injected into the container.

Equilibrium atmospheres are appropriate for the compounds that undergo decompositions at laboratory temperature and pressure, where at least one of the reaction products is a gas or vapor. This case comprises most solvates (e.g., Na2SO4•10 H2O, SnCl4 • tetrahydrofurane), NaHCO3,  NH2COONH4,  H2SO4, HNO3 and many others. The same applies to most of the solutions of titrimetry. In such cases, the initial composition of the chemical is changed minimally if the internal atmosphere has an equilibrium composition, which is modified slightly by keeping the time of aperture of the cap as short as possible and the container vertical.

The post-use phase can be minimized by purchasing the quantity of chemical needed for the project or using dedicated secondary containers of that volume. Otherwise the residue can be checked, possibly purified or disposed of.

Flushing with inert gas after partial removal of contents of a bottle will force out part of the internal atmosphere containing the vapors of the substance. Unless its vapor pressure is negligible, as is the case with KCl, for instance, this operation should be carried out under a fumehood.

Use of the above procedures resulted in a drastic reduction in the dispersion and an increase in the reproducibility of data characterizing adducts in solution, keeping solvents and reagents free from detectable deterioration at their fifth-year check. The procedure is even applicable to substances that are particularly sensitive to oxygen, like chloroform and diisopropyl ether, or sensitive to water, like heavy water and CH3OD. Bright spheres of recovered sodium when covered with kerosene and flushing the container with argon after each withdrawal were shiny at the same control time.

Since all condensed phase chemicals must contain characteristic mass fractions and possibly reaction products of the components of the atmosphere internal to the container, choosing and keeping such an atmosphere as uninfluential as possible avoids the adsorption, absorption and formation of unwanted products that deteriorate the sample. The simple procedures indicated to achieve this significantly reduce or avoid the degradation of samples, extending their useful life. The consequent savings of time and other resources make up for the brief additional time (about 60 seconds per withdrawal) required to follow the reported recommendations.

Dust and Noise in the Lab, Part 2: Can Better Testing Equipment Help?