Gas chromatography (GC), also sometimes known as gas-liquid chromatography, (GLC), is a separation technique in which the mobile phase is a gas. Gas chromatographic separation is always carried out in a column, which is typically “packed” or “capillary”. Packed columns are the routine work horses of gas chromatography, being cheaper and easier to use and often giving adequate performance. Capillary columns generally give far superior resolution and although more expensive are becoming widely used, especially for complex mixtures. Both types of column are made from non-adsorbent and chemically inert materials. Stainless steel and glass are the usual materials for packed columns and quartz or fused silica for capillary columns.

Gas chromatography is based of analyte between a solid or viscous liquid stationary phase (often a liquid silicone-based material) and a mobile gas (most often helium). The stationary phase is adhered to the inside of a small-diameter (commonly 0.53 – 0.18mm inside diameter) glass or fused-silica tube (a capillary column) or a solid matrix inside a larger metal tube (a packed column). It is widely used in analytical chemistry; though the high temperatures used in GC make it unsuitable for high molecular weight biopolymers or proteins (heat denatures them), frequently encountered in biochemistry, it is well suited for use in the petrochemical, environmental monitoring and remediation, and industrial chemical fields. It is also used extensively in chemistry research. 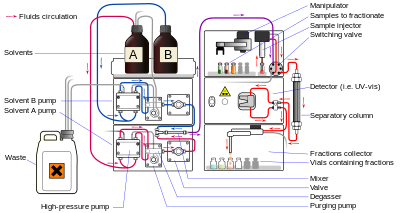 In general, Hydrophobic Interaction Chromatography (HIC) is advantageous if the sample is sensitive to pH change or harsh solvents typically used in other types of chromatography but not high salt concentrations. Commonly, it is the amount of salt in the buffer which is varied. In 2012, Müller and Franzreb described the effects of temperature on HIC using Bovine Serum Albumin (BSA) with four different types of hydrophobic resin. The study altered temperature as to effect the binding affinity of BSA onto the matrix. It was concluded that cycling temperature from 50 degrees to 10 degrees would not be adequate to effectively wash all BSA from the matrix but could be very effective if the column would only be used a few times. Using temperature to effect change allows labs to cut costs on buying salt and saves money.

If high salt concentrations along with temperature fluctuations want to be avoided you can use a more hydrophobic to compete with your sample to elute it. [source] This so-called salt independent method of HIC showed a direct isolation of Human Immunoglobulin G (IgG) from serum with satisfactory yield and used Beta-cyclodextrin as a competitor to displace IgG from the matrix. This largely opens up the possibility of using HIC with samples which are salt sensitive as we know high salt concentrations precipitate proteins. 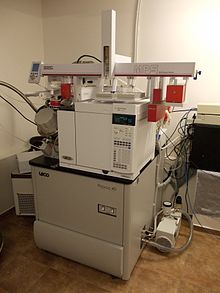 In some cases, the chemistry within a given column can be insufficient to separate some analytes. It is possible to direct a series of unresolved peaks onto a second column with different physico-chemical (chemical classification) properties. Since the mechanism of retention on this new solid support is different from the first dimensional separation, it can be possible to separate compounds by two-dimensional chromatography that are indistinguishable by one-dimensional chromatography.

The sample is spotted at one corner of a square plate, developed, air-dried, then rotated by 90° and usually redeveloped in a second solvent system.

The simulated moving bed (SMB) technique is a variant of high performance liquid chromatography; it is used to separate particles and/or chemical compounds that would be difficult or impossible to resolve otherwise. This increased separation is brought about by a valve-and-column arrangement that is used to lengthen the stationary phase indefinitely. In the moving bed technique of preparative chromatography the feed entry and the analyte recovery are simultaneous and continuous, but because of practical difficulties with a continuously moving bed, simulated moving bed technique was proposed. In the simulated moving bed technique instead of moving the bed, the sample inlet and the analyte exit positions are moved continuously, giving the impression of a moving bed. True moving bed chromatography (TMBC) is only a theoretical concept. Its simulation, SMBC is achieved by the use of a multiplicity of columns in series and a complex valve arrangement, which provides for sample and solvent feed, and also analyte and waste takeoff at appropriate locations of any column, whereby it allows switching at regular intervals the sample entry in one direction, the solvent entry in the opposite direction, whilst changing the analyte and waste takeoff positions appropriately as well.

Pyrolysis is the thermal decomposition of materials in an inert atmosphere or a vacuum. The sample is put into direct contact with a platinum wire, or placed in a quartz sample tube, and rapidly heated to 600–1000 °C. Depending on the application even higher temperatures are used. Three different heating techniques are used in actual pyrolyzers: Isothermal furnace, inductive heating (Curie Point filament), and resistive heating using platinum filaments. Large molecules cleave at their weakest points and produce smaller, more volatile fragments. These fragments can be separated by gas chromatography. Pyrolysis GC chromatograms are typically complex because a wide range of different decomposition products is formed. The data can either be used as fingerprint to prove material identity or the GC/MS data is used to identify individual fragments to obtain structural information. To increase the volatility of polar fragments, various methylating reagents can be added to a sample before pyrolysis.

Besides the usage of dedicated pyrolyzers, pyrolysis GC of solid and liquid samples can be performed directly inside Programmable Temperature Vaporizer (PTV) injectors that provide quick heating (up to 30 °C/s) and high maximum temperatures of 600–650 °C. This is sufficient for some pyrolysis applications. The main advantage is that no dedicated instrument has to be purchased and pyrolysis can be performed as part of routine GC analysis. In this case quartz GC inlet liners have to be used. Quantitative data can be acquired, and good results of derivatization inside the PTV injector are published as well.

An example of a HPCCC system

Countercurrent chromatography (CCC) is a type of liquid-liquid chromatography, where both the stationary and mobile phases are liquids. The operating principle of CCC equipment requires a column consisting of an open tube coiled around a bobbin. The bobbin is rotated in a double-axis gyratory motion (a cardioid), which causes a variable gravity (G) field to act on the column during each rotation. This motion causes the column to see one partitioning step per revolution and components of the sample separate in the column due to their partitioning coefficient between the two immiscible liquid phases used. There are many types of CCC available today. These include HSCCC (High Speed CCC) and HPCCC (High Performance CCC). HPCCC is the latest and best performing version of the instrumentation available currently.

How to Properly Shut Down an Agilent GC-MS